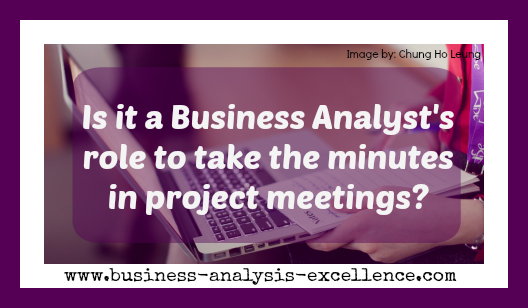 Is it a Business Analyst’s Role to take meeting minutes? | Yes or No

Should a Business Analyst be responsible to take minutes in project meetings?

There is a lot of debate about whether a Business Analyst should be taking minutes as part of their Business Analyst role on a project or whether it is simply not in their job description as a professional business analyst. This article outlines some of the different perspectives on this sticky topic and also concludes with how this particular task should be treated by Business Analysts.

Let’s start this article by being very clear that taking minutes is not part of the Business Analysts role in any formal way. However, there are many different considerations and arguments to be had around this topic and we outline some of the mainstream arguments here.

Argument #1: Taking minutes is part of the Business Analysis Task.

Argument #2: The Business Analyst ends up doing the minutes informally every time because they are available and do lots of documentation as part of their role anyway (besides, who else will do it if not them?).

This scenario makes it harder to manage the Project Manager’s expectations without damaging the relationship between the Business Analyst and the Project Manager when the Business Analyst starts to feel that they are being asked to do something that it really not part of their role. Catch this misunderstanding around responsibilities as early as possible to avoid creating an uncomfortable relationship in future.

Argument #3: We all know it is not the Business Analysts role to take minutes, but they (have to) do it anyway.

How to ask a Business Analyst to help with minute taking?

Firstly, it is important to keep in mind that the Business Analyst will in most cases be more than willing to help to take the minutes in a meeting providing that they are approached in a way which addresses the following:

Many Business Analysts will just take on this task and not say anything. This is not a great idea because it sets the wrong expectation around the whole profession of Business Analysis. If you are simply accepting the role of minute taker in every scenario of your project, you will be creating the expectation among your peers that minute taking is in fact a formal part of the Business Analyst’s role. It is like asking an Accountant to sort out a legal problem. You know the Accountant will say to you that you need to contact a legal representative to help you to ensure you get the best results. They may offer to help you with contact details or general personal opinions (in order to be helpful) but they will not take on the task without saying anything to correct the misaligned task request. So as a Business Analyst you should say that you are willing to help out this one time (for example), but perhaps the project should appoint a project analyst to assist with the task of minute taking in the future. Or suggest the project team shares the responsibility around the team to ensure that you don’t create this false expectation that minute taking is part of a Business Analysts role.

Being a team player is different

Another reason why a Business Analyst should find a way to point out that minute taking is not a formal part of their role is to prevent setting an expectation that you as the Business Analyst don’t really want to set in the first place. Of course it is part of being a great team player to help out with tasks that is not necessarily always part of your job description but there is a fine balance to be had between setting the wrong expectations about your role (and all other Business Analysts roles as a result) as a Business Analyst and being a good team player. It is in fact your responsibility to manage this common issue pro-actively to ensure that all stakeholders learn what the Business Analyst role includes and doesn’t include. Your project team will respect your professionalism and pride in your profession and there are plenty of other ways to demonstrate that you are a great team player.

Finally, to conclude a controversial topic, it is important to emphasize the fact that Business Analysis as a profession is in a stage of development and formal formulation in the industry (and making fantastic progress at that) and to help this profession be seen as a defined and specific profession all Business Analysts must respect the boundaries of their roles. Learn to gently educate your peers and project managers about what it means to be a Business Analyst whilst remaining a great team member to have on a project team.