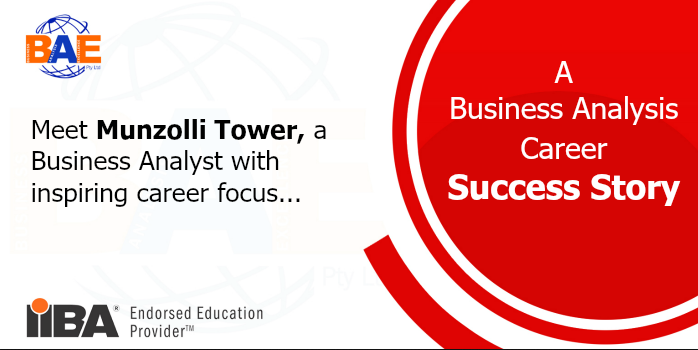 He achieved CBAP® and got new Business Analysis role in a very short timeframe!

Munzolli is one of those people who would move a mountain if he could. When I met Munzolli he was working for a large US bank as a Financial Analyst with quite informal Business Analysis experience. I remember he was telling me during our coaching session that he can worked besides another Business Analysts who just happened to be a CBAP at the same location. After a chance meeting with the BA he asked Munzolli what was his job? Munzolli told him his official job is working with Muni Bond but that he was working at the time on several projects that have been amazing to work on. He found out that doing this was more enjoyable than what he was originally hired to do. After this conversation he was introduced to the International Institute of Business Analysis (IIBA) and this would help him understand what it would take to be a certified professional Business Analyst. After gaining this knowledge when he went back to the projects he was working on he really wanted to be a formally qualified Professional Business Analyst too!

As part of his strategy to achieve this goal, he decided to join the BAE Advanced Training Program. He went on to complete his training to an excellent standard, he also re-invented his LinkedIn Profile, re-wrote his resume and started to look for roles as a “real” Business Analyst. In the background, Munzolli applied to sit the CBAP® exam and obtained his CBAP® designation too!

Munzolli was very serious about his Business Analysis ambitions and is now working as a Professional Business Analyst solving problems that people didn’t even realize they had!

I am very proud to have worked with Munzolli and was totally inspired by his drive to achieve his goals. Well done and you are certainly an example to others with the same goals!

Since we wrote this short success story for Munzolli, he has also achieved the PMP certification. Well done Munzolli! You are a true example of going for what you want!